As a disease that affects the mental as well as the physical health of the individual, vitiligo requires special care and concern ..

Individualised Interactive Treatment Protocol
At MelanoSite we have an individualized management of vitiligo which is dependent of type of vitiligo, present state of vitiligo, extent of vitiligo, patients parameters like age, lifestyle, cultural background, ethnicity, social, familial and personal responsibilities and commitments also give importance in this approach.
Management of vitiligo is divided as follows:
1. Investigation This is the first step. Vitiligo Panel of Tests are done to identify the underlying parameters in the blood which contribute the induction of vitiligo. Based on this we follow a target based treatment approach. These tests are finalized after 2 yrs of research at our centre.

2. Understanding the Vitiligo-Patients are educated about the possible cause of their condition. Especially Generalized Vitiligo is considered as Free Radical Disease an Lifestyle disorder. Free radicals are the toxins produced in the body during metabolism. Auto immunity in this type of vitiligo is not necessarily acts in the initial part of disease mechanism. The person might have some genetic defect in their melanocytes (colour producing cells) or they might be having increased production of free radicals or decreased neutralization of the same. Moreover, most of the patients have vitamin D deficiency which usually prevents auto immunity. Any genetic defects are need not be hereditary. So, in vitiligo there might be some genetic defects at above mentioned levels but one need multiple external and internal factors to induce vitiligo. At our Centre we help patients to transform a phenotype (appearance of white patches due to genetic defects +inducing factors) to a genotype (no white patch due to the targeted management of inducing factors but you will be having the genetic defect which will be dormant).
Possible disease mechanism- Melanocytes cannot tolerate or neutralize the free radicals unlike other normal cells and with this background there will be increased production of free radicals or decreased neutralization or both. Once cells are damaged melanin (antigen) in them stimulate immune system to produce immune cells which can kill the abnormal and damaged melanocytes.Over the time these cells can even kill normal melanocytes as well.Most of the patients do have Vitamin D deficiency which prevents such hypersensitivity of immune system and prevent auto immunity.
Our approach to achieve
1. Decreasing or clearing of immune cells targeting melanocytes
2. Protection against auto immunity or preventing hypersensitive immune system from producing those killing immune cells
3. Decreasing the production of free radicals
4. Increasing the neutralization of free radicals
5. Mild and effective stimulation of cells to achieve proliferation and migration of melanocytes to the white patches. However, it needs reservoir of cells either at the margins, mainly at the black hair's root and the stem cells which could become melanocytes when needed.
6. If in case of depleted reservoir replenishment of cells by cellular transplantation
7. Maintenance of good outcome by life style changes, dietary modifications, and general skin care measures etc.

3. Treatment Done in 4 phases
a. Arresting Phase– Stabilizing the spreading vitiligo is main step in the treatment. We don't try to bring back colour at this point. One has to understand that melanocytes are the main targets for the immune cells. So when there are immune cells around a white patch, if we increase the number of melanocytes, they will be killed by immune cells, eventually. First we have to remove those killing cells and treat patient’s deficiencies and derangements in the blood along with that. This will eliminate a hostile environment in the patch and creates a suitable condition for cells to proliferate and migrate so that the white patches re pigment in the next phase.
b. Pigmentation Phase– Treatment in the first stage will continue but some of the medications are phased out gradually. We will try to stimulate melanocyte reservoirs to get re pigmentation. We don't prefer harsh medications which induce blistering, burning and deplete the cell reservoir. We usually offer either mild sun exposure or home based NBUVB exposure (which is more effective).
c. Refractory phase - those who don't repigment with medicines and their patches are stable, one could go for cellular transplantation.. In those who don’t have reservoir or depleted reservoir, we have to treat them in refractory phase. Cellular transplantation replenishes lost cells but have a very minimal role in tackling underlying causes.
d. Maintenance Phase– Where patient will be having minimal medications but have to follow lifestyle changes, dietary restrictions and general skin care measures. It is for patients who achieve maximum pigmentation because of the intact reservoir of cells or precursors of cells. The patient is also asked to undergo follow up tests to make sure that they don’t have any deficiencies and derangements (contributing for disease onset)
However, the duration of the phases or skipping of certain phases is done according to the need of the patient.

Vitiligo will go
We have the vision that one day vitiligo will no longer affect the vitiligo sufferer. There are 3 possible scenarios.
1. Stable focal and segmental vitiligo and long time stable but refractory generalised vitiligo will be tacked by advanced treatment options and vitiligo will actually go.
2. Unstable vitiligo can be stabilised first and significant re pigmentation can be achieved. Refractory patches can be treated with advanced cell transplantation procedures.
3. There will be small subset of patients where the treatments may not give satisfactory results. For them supportive measures will make sure that they no longerbothered by vitiligo rather they learn to live positively with vitiligo. By this literally we can achieve vitiligo will go.

I recommend Dr. Holla with my highest level of enthusiasm.

It is with great pleasure that I write a letter of recommendation for
Dr. AnanthaPresadHolla. Dr. Holla is very knowledgeable and passionate ... 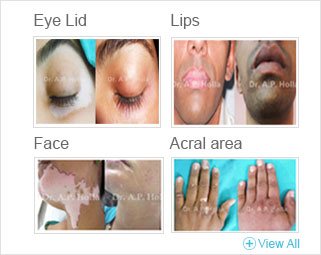